Hamburg-America's Brasilia was built by Harland & Wolff of    Belfast. Launched in November 1901, she made her maiden voyage from Belfast to New York on 21 March 1898. She was then placed on Hapag's Hamburg-Baltimore route, making 13 roundtrips on that route between May 1898 and October 1899.

In February 1900, Brasilia was sold back to Harland & Wolff, who then sold her on to the Dominion Line. Dominion renamed her Norseman, eliminated the 300 second class accommodations she had had as Brasilia, and had her fitted as a steerage/freight ship for Dominion's North Atlantic service. (The refitting also included an increase in the number of masts, from two to four, as shown here.) Her first voyage for Dominion, though, was as a Boer War troop transport, in February 1900.

From 1910 to 1914, Norseman was chartered to the Aberdeen Line and sailed on a London-Cape Town-Sydney route.

On 22 January, while en route from Plymouth to Salonica with a cargo of mules and munitions, Norseman was torpedoed by U39 in the Gulf  of Salonica; she was towed to Mudros harbor, where she was again torpedoed and sank (according to Bonsor) or beached (according to Williams and Kludas). In any event, Norseman remained at Mudros until she was scrapped in 1920.

From the diary of a passenger on the same ship comes this description of the voyage. 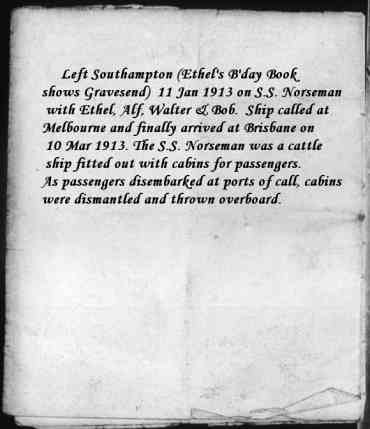 Source as shown below:

Postcard from the ship


DEATH OF TWO CHILDREN. Her decks crowded with passengers, nearly all of whom were of the immigrant class, the big Aberdeen liner Norseman berthed in the Victoria Dock yesterday   forenoon, having arrived in Hobson's Bay   from London overnight.. The exact number of new arrivals on board was 961 men women, and children of whom 585 were for Victoria the remainder intending to distribute themselves over New South Wales and Queensland. Included in the liners human freight were two young fellows who not possessing the wherewithal to pay their passage "stowed away" in   the coal bunkers. The presence of these  unbidden guests not being discovered until the vessel had proceeded a considerable distance on her voyage, no option was left with Captain Berry but to bring them on to Melbourne. They, however, were made to "work their passages" and, having given a good account of themselves in this respect, they will in all probability not be prosecuted. Captain Berry who has had a good deal of experience among immigrants describes his present contingent as a desirable lot of people. Unfortunately the voyage was productive of the death of two children (sisters) named Fisher. One   of them aged 5 years, succumbed to heat stroke; the other, an infant in arms, dying from diptheria, of which disease a slight outbreak occurred. Otherwise the voyage proved uneventful, although in its early stages bad weather caused some discomfort and depression among those on board. Upon leaving the Bay of Biscay, however, the Norseman met with pleasant conditions, which continued almost uninterruptedly for the remainder of the passage. Before leaving for Sydney the vessel will unload 3,000 tons of general cargo. Among the Norseman's contingent of immigrants were 27 land-seekers who, with their wives and families, represent 122 souls and possess a capital of £6,370; 40   farm workers, representing 53 persons and  £345; 350 nominated passengers, and six British lads. The work of finding work for the immigrants in search of employment will be begun today, and it is expected that nearly all will have been placed by nightfall. With a view of becoming acquainted with Victorian conditions, some of the intending land-seekers will probably secure employment on farms before taking up selections and employers  who have accommodation for and require families to assist them are asked to communicate with the Immigration Bureau without delay.